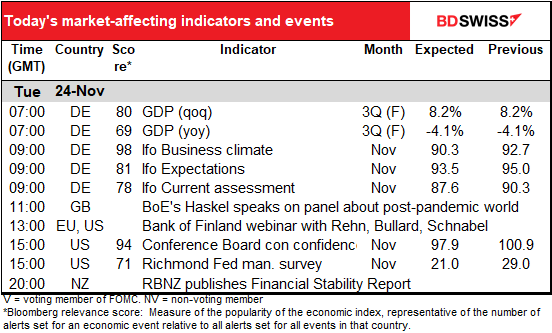 With three vaccines now on the horizon, including one more suitable for the developing world, the “risk-on” mood continued. Stocks were generally higher and the commodity currencies all gained, while the safe-haven JPY and CHF fell.

Curiously though it was not EUR but rather USD that benefited from the improved mood this time, contrary to the recent performance of USD as a “safe-haven” currency. Some of that may have been because of the US outperformance on the preliminary purchasing managers’ indices (PMIs) yesterday. The US PMIs for November were both much better than expected – they had both been expected to fall but in the event were both up, quite sharply in the case of manufacturing. Especially the employment component of the service-sector PMI jumped 5.5pts to 58.6, a record high. That’s a good sign for November’s payroll figure.

By contrast, the Eurozone PMIs were mixed — manufacturing was a bit better than expected, but services were significantly worse. Nowadays it’s the service-sector PMI that everyone’s watching, as services are more directly affected by the pandemic than manufacturing is.

There may also have been some technical factors behind the move. EUR/USD broke above 1.19 for the second time in two weeks, but couldn’t hold that level and had slipped just below it when the US PMIs came out. The coincidence may have encouraged selling.

In addition to the PMIs, there were early month-end flows from corporations that were going to be out of the office over the Thanksgiving holidays. 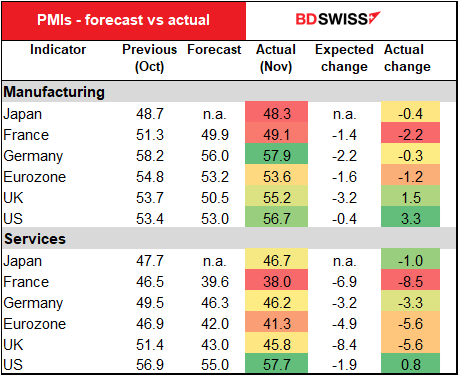 GBP also got a boost from better-than-expected PMI data. The UK’s service-based economy, which has been hard-hit by the pandemic, is also expected to be a major beneficiary of the vaccines that have been announced, especially yesterday’s vaccine by Oxford/AstraZeneca. The UK has pre-ordered 100mn doses, enough to vaccinate most of the population. PM Johnson said most people in need of vaccination would be inoculated by early April. Johnson also announced that the second lockdown in England would end on 2 Dec and would be replaced by a return to the system of three regional tiers.

I would’ve expected the combination of the good PMIs, the good news on the vaccine front, and a firm end-date for the lockdown to push GBP up even more. I suspect that it too was held back by early month-end flows. I think the pound could continue the gains next month, depending of course on how the Brexit talks go.

The US election debacle is drawing to a close as Trump caved in and allowed President-elect Biden to get access to the government. Biden has made several appointments already. He’s expected to pick former Fed Chair Janet Yellen as Treasury Secretary. This is an important choice because in every country nowadays, the Treasury and the central bank are working closely together to propping up the economy. Canada for example recently picked someone with experience working at the Finance Department to head up the Bank of Canada, the reverse move but the same idea. One hopes Yellen’s appointment will avoid disgraces like that which is occurring now, as Treasury Secretary Mnuchin tries to shut down some of the Fed’s pandemic rescue programs on his way out. On the contrary, Yellen has been a strong supporter of using fiscal policy in the current circumstances.  “While the pandemic is still seriously affecting the economy, we need to continue extraordinary fiscal support,” she said in a Bloomberg Television interview in October. She called fiscal support early in the crisis “extremely impressive” but noted that key provisions had lapsed.

Yellen is a labor economist and was the driving force behind the Fed’s slower-than-usual increase in rates during 2015-2018 as they experimented to see how low the unemployment rate could go without pushing up inflation. Her period of leadership laid the groundwork for the radical shift in thinking behind the new Statement on Longer-Run Goals and Monetary Policy Strategy, which emphasizes ensuring maximum employment over restraining inflation. I think she was a good choice for the position, as does the market – the S&P 500 rose 0.45% in fifteen minutes or so after the news broke.

Many people wanted Fed Gov. Lael Brainard to get the job. But Brainard is the last Democratic appointee on the Fed Board of Governors and so was probably needed there. Moreover she’s got a good chance of getting the Fed Chair job when Powell’s term expires in 2022, although Biden could reappoint him (that often happens) and Powell hasn’t done anything that would make a Democratic President want to get rid of him (on the contrary, anyone Trump hates can’t be all bad).

Meanwhile, the travel data in the US is starting to heat up.

Since 17 March there had been only one day (18 Oct) when over 1mn people flew in the US. But Friday and Sunday over 1mn people flew. It looks like people are indeed going somewhere for Thanksgiving. Uh-oh… Hospitals in the US are already filled to capacity – people with the usual problems – heart attacks, car accidents etc – can’t get treatment. See this thread on Twitter for a roundup from across the country. What will it be like in three weeks?

Again a fairly quiet day insofar as indicators are concerned.

During the European day we get the Ifo indices. Both current assessment and expectations are forecast to decline, the former by more than the latter (-2.7 vs -1.5). That makes sense given that the restrictions on economic activity now are meant to improve the outlook for the future. 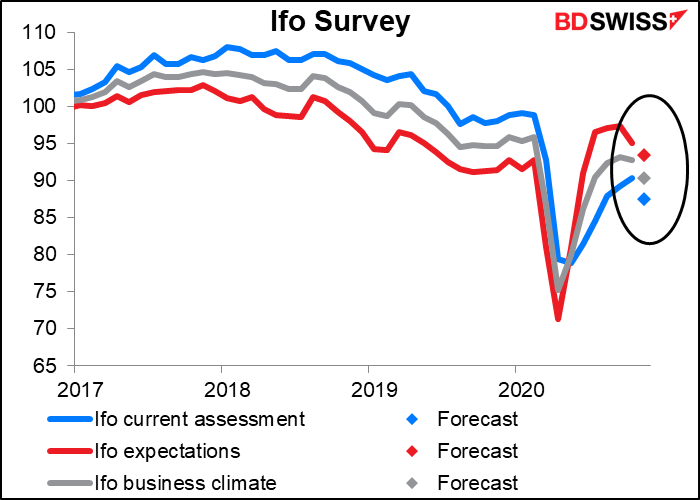 The decline would corroborate yesterday’s fall in Germany’s composite PMI to 52.0 from 55.0. 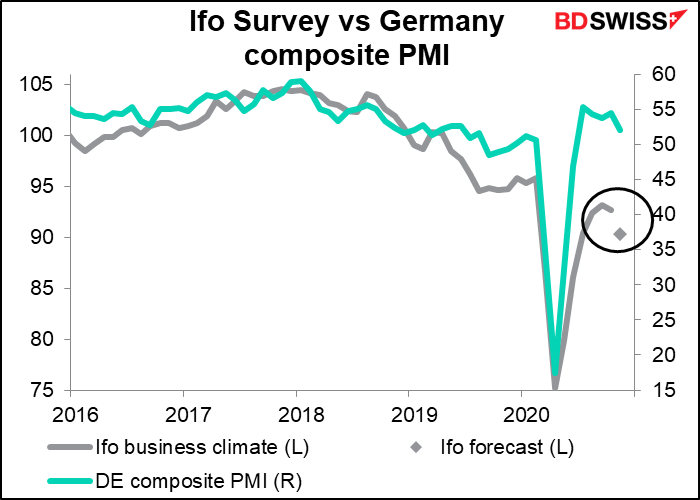 The US Conference Board index of consumer confidence is expected to fall slightly, but not as much as the U of Michigan consumer sentiment index declined. Maybe more of the survey forms were filled out after the election with this survey than with the U of M. According to the Conference Board, the forms are mailed out so that the questionnaires reach sample households on or about the first of each month and the preliminary results include all forms returned by the 18th of the month. It’s likely that with the US mail flooded with ballots, many forms arrived later than usual this month. In any event, only a rise in confidence would take the market by surprise. A small decline, as is being forecast, would just be within the recent range and wouldn’t cause any reassessment of the future. 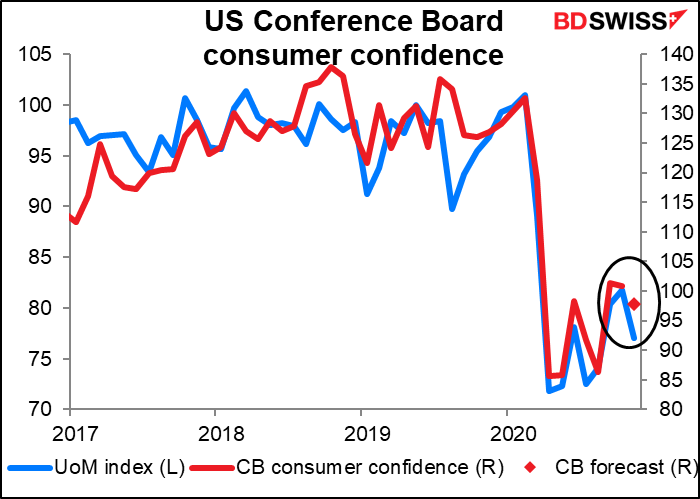 The only other indicator on the schedule is the Richmond Fed survey. The Bloomberg relevance score shows that the market doesn’t watch it as closely as it does the Empire State or Philly Fed indices, but investors certainly should:  my research shows that among the five regional Fed surveys, it’s the best correlated with the Institute of Supply Management (ISM) manufacturing survey, which is what people are trying to forecast. (It doesn’t have much power at explaining the Markit manufacturing PMI however – the only one that’s good at that is the Empire State survey.) 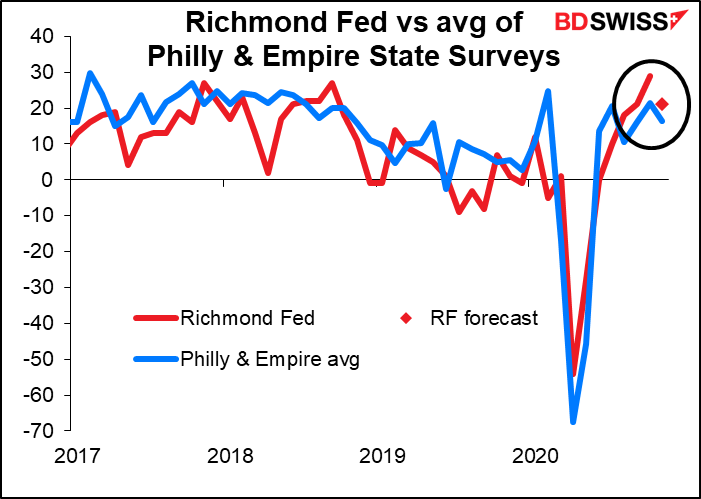 Then overnight the Reserve Bank of New Zealand (RBNZ) publishes its twice-yearly review of the financial system, the Financial Stability Review (FSR). It’s likely to attract more attention than usual this time. The focus will be on the resurgence in the housing market and the growth in mortgage lending. Lending has been spurred on by the rebounding economy, record-low interest rates, and the removal in April of limits on high loan-to-value ratio lending. However, the minutes of the November Monetary Policy Committee meeting said that “the Reserve Bank will consult on the possible reintroduction of limits on high loan-to-value ratio lending, in order to slow the build-up of riskier lending on bank balance sheets.” The RBNZ has previously announced changes to those limits in the FSR. Even if it doesn’t announce any changes this time, the FSR is likely to include an update on those consultations and the concerns that prompted them. 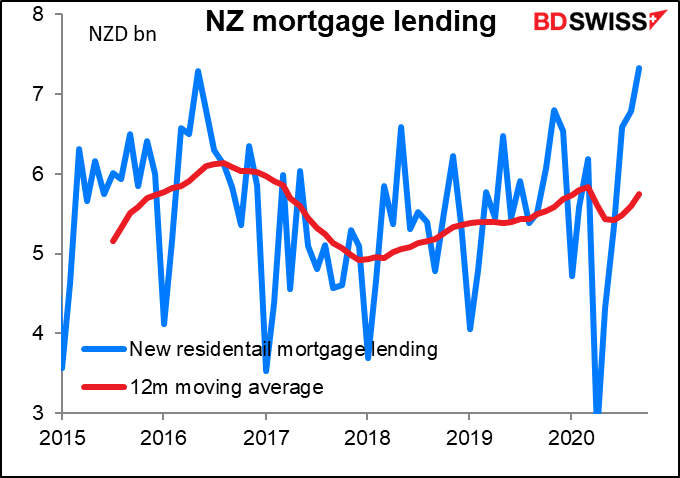 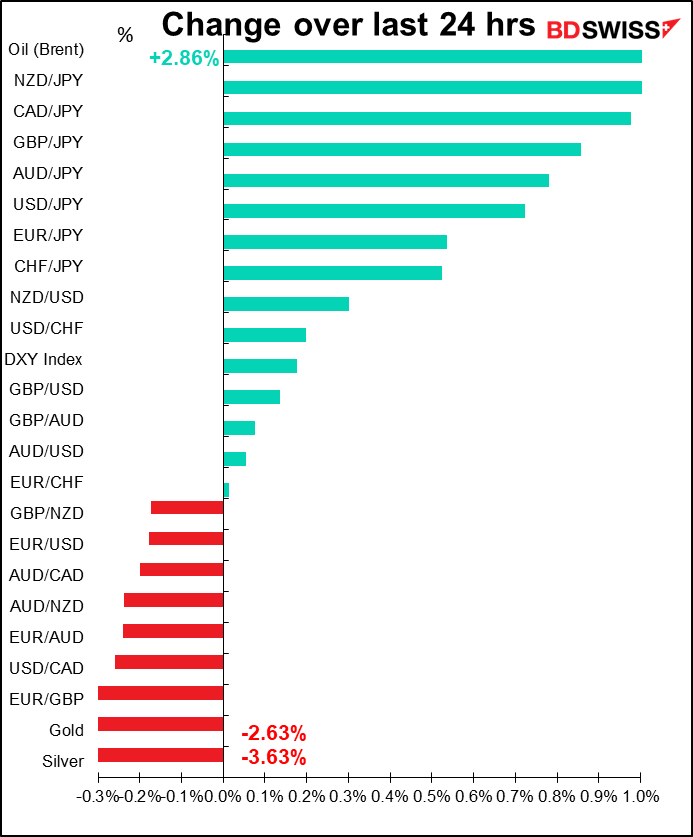