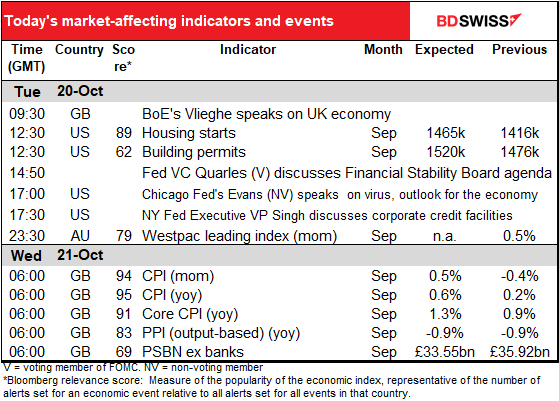 Are there really people out there who still expect Congress to agree on a CARES Act 2.0 fiscal stimulus package? Apparently, since stock markets tanked yesterday in disappointment that one seems unlikely. It’s seemed unlikely to me for the last several weeks, but some people still had hope. However the deadline, according to House Speaker Pelosi, is tonight, and it’s tough to see it getting done. Although Trump is pushing the two sides to agree on a large package, many Republican senators still disapprove and there’s no guarantee that Senate Majority Leader McConnell Y.S. would even bring such a package up for a vote. On the contrary, he’s preparing the Senate for a vote on the Senate Republican’s $500bn bill, which the House has already said it wont vote for. Welcome to divided government.

Still, the two sides are trying to project hope. “Finally, they have come to the table and we’re going to try to get something done,” Pelosi said on MSNBC Monday evening. She said the two sides would take stock today. I’m sure the stock market will take stock, too. Personally, I don’t expect them to reach an agreement, and even if they do, I don’t expect the Senate to vote on it. That would be a “risk-off” result that could push JPY, CHF and USD higher.

With hope fading, stocks were down in the US (S&P 500 -1.63%, NASDAQ -1.65%) and most markets are lower today in Asia, Chian and India being the main exceptions (but they’re up only slightly). Nonetheless, at the time of writing the S&P 500 futures are indicaitng the US market should open up 0.3%

The FX market was of course hit by the “risk-off” mood, but with some interesting anomalies. EUR was the biggest gainer, not USD. That was probably a spillover from early in the trading day, when strong data out of China (the retail sales and industrial production, not so much GDP) supported risk sentiment. EUR/USD climbed during European and early US trading as hedge funds bought the pair. Nonetheless it failed to break 1.18 and came off slightly in late US and Asian trading.

EUR/USD seems to be trading in a channel, with market participants hesitant to buy above 1.18 after the ECB’s strong verbal intervention recenlty, yet unwilling to sell aggressively either, given the general “risk-on” mood that has been pushing the dollar down recently. (That may be changing though as people game out what a “blue wave” that gives the Democrats control of Congress and the White House might mean for the US economy and the Fed. Check out this week’s Positioning Weekly, which notes that speculators have gone long the DXY index for the first time since early June.)

The big mover of the day was AUD, which fell sharply after Reserve Bank of Australia (RBA) Assitant Gov. Kent said there was still room to compress short-term rates and that it wouldn’t be unexpected for Australian bank bill swap rates “to pop below zero.”  This comes on the heels of last week’s observation by RBA Gov. Lowe that the Australian 10-year yield is higher than “almost everywhere in the world,” which is true – nowadays they’re even higher than in notorious borrower Italy. Australian bank bill futures are now pricing in a year-end rate of 0.06%, vs the current effective rate of 0.13% (which compares to the target rate of 0.25%). In other words, they’re discounting a 50-50 chance of going to zero, but not yet going negative. 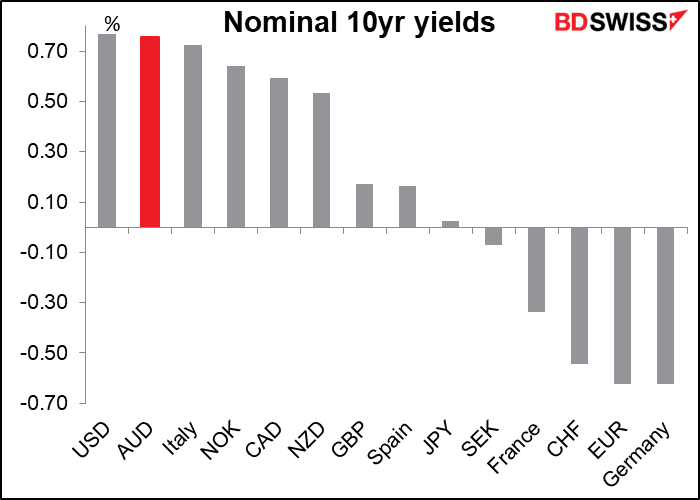 The graph shows clearly how extraordinary the inflows into the Australian bond market have been from Japan recently. From March to August the Japanese bought JPY 2.5tn (AUD 33.7bn) of AUD bonds. This compares with the increase in the RBA’s balance sheet over this time of AUD 102bn. By propping up the AUD/JPY exchange rate, these inflows from Japan are offsetting a substantial part of the RBA’s loosening efforts. The RBA seems determined to discourage these purchases, which could lead to a lower AUD/JPY over time regardless of where risk sentiment is. It could also deflect the JPY flows into other higher-yielding currencies, such as CAD. That would tend to make CAD appreciate vs AUD. Although for now, the prospect of lower interest rates to come in Australia is a reason to rush in ASAP. 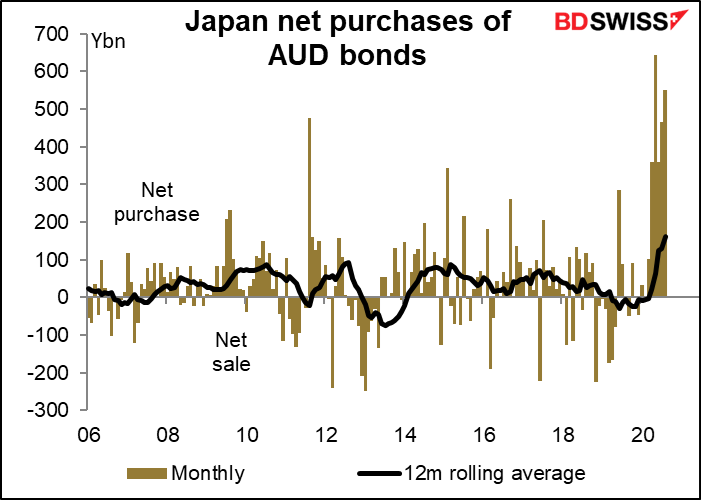 There were so many headlines out about Brexit I can’t even begin to go through them all or make sense of it. Overall it seems to be a lot of bluster and posturing but with everyone careful to avoid breaking off the talks. There was one worrisome statement from 10 Downing that highlighted the UK government’s belief that “there is no basis to resume talks unless there is a fundamental change of approach from the EU.” Of course the EU also says that all of the concessions have to come from Britain. That mutually contradictory approach is one reason why GBP is weaker this morning. Also Wales and Northern Ireland are implementing more stringent lockdown requirements, which will weigh on the already-soft economy and make further Bank of England easing more likely.

On the other hand, GBP was supported somewhat by an announcement from the EU-UK Joint Committee that they had met and agreed “that contacts at all levels will significantly intensify.” They also agreed to meet again in mid-November. So perhaps they will get something done at the last minute. There’s no point in my putting forward a fundamental view on sterling at this point, as the currency is just being bounced around by random statements by random officials at random times.

The Bank of Japan once again held an auction of dollars, this time for over the year-end, and had no bids, the second time in a row this has happened. The dollar shortage is well and truly over. 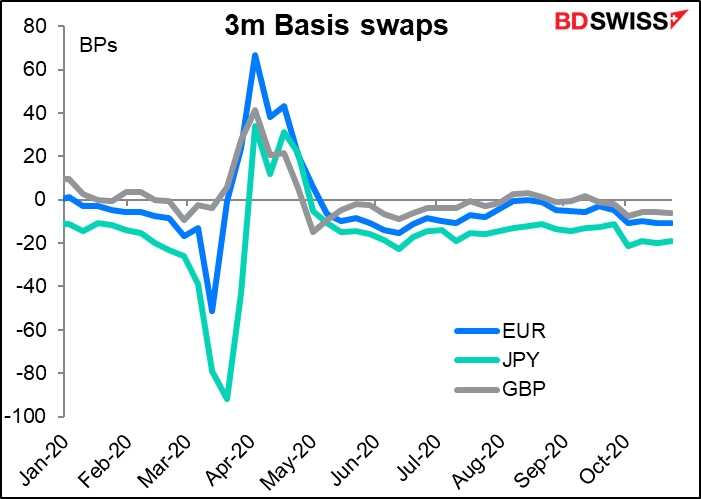 Again, not much on the schedule today in terms of indicators. Nothing during the European morning, in fact.

US housing starts & building permits are both expected to rise, and by similar amounts –  2.8% mom and 2.0% mom, respectively. The impact of the wildfires on the west coast adds some uncertainty to this indicator. 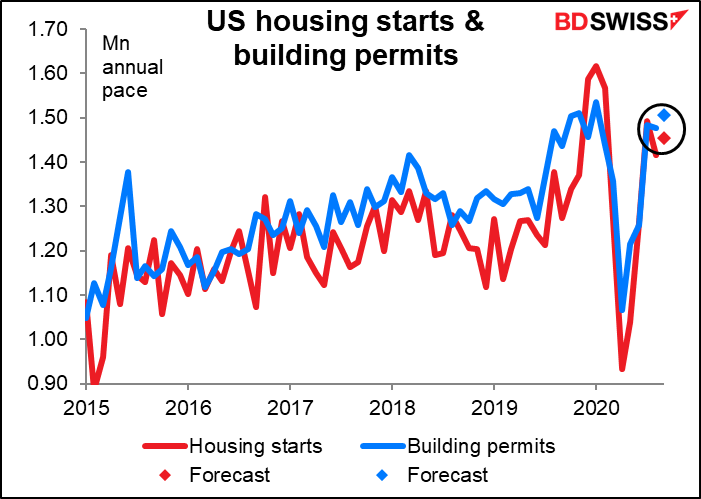 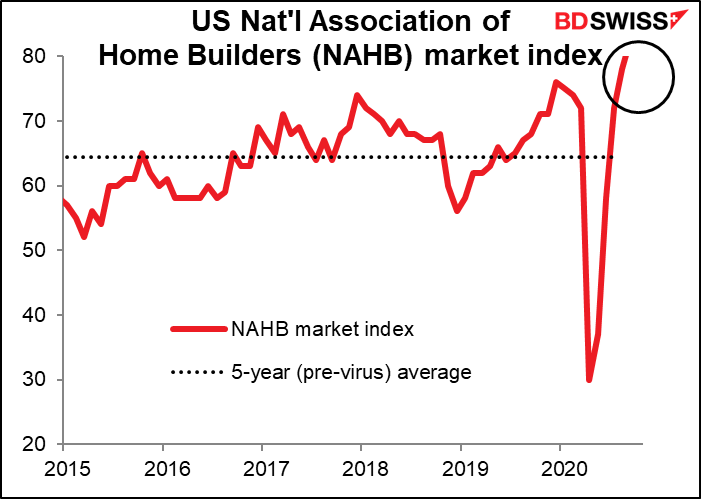 Fed Vice Chair for Supervision Quarles will be speaking on financial stability at the annual meeting of the Securities Industry and Financial Markets Association (SIFMA). Quarles may take this opportunity to further explain his rather surprising statement of last week that the Treasury market has grown to be so large that the Fed might have continue to intervene indefinitely. “It may be that there is a simple macro fact that the Treasury market being so much larger than it was even a few years ago…that the sheer volume there may have outpaced the ability of the private market infrastructure to support stress of any sort there.” He said that raises the  question of whether the private sector can grow fast enough to cope, “or will there be some indefinite need for the Fed to provide — not as a way of supporting the issuance of Treasuries, but as a way of supporting a functioning market in Treasuries — to participate as a purchaser for some period of time.” The length of time that the Fed will continue with its large-scale purchases of Treasury bonds is of course a major concern to the markets.

Also, you probably haven’t ever heard of New York Fed Executive Vice Presidents Delip Singh. Me neither, until this week. He and his colleague Lori Logan, who will be speaking Friday, are responsible for managing the Fed’s balance sheet. He’ll be speaking on the impact of the Fed’s corporate credit facilities on capital markets and the economy. This is quite important to the markets as these facilities are currently set to stop purchasing bonds at the end of the year. These programs have helped to support corporate bond prices this year, thereby allowing companies to issue bonds and allowing buyers to avoid big losses. 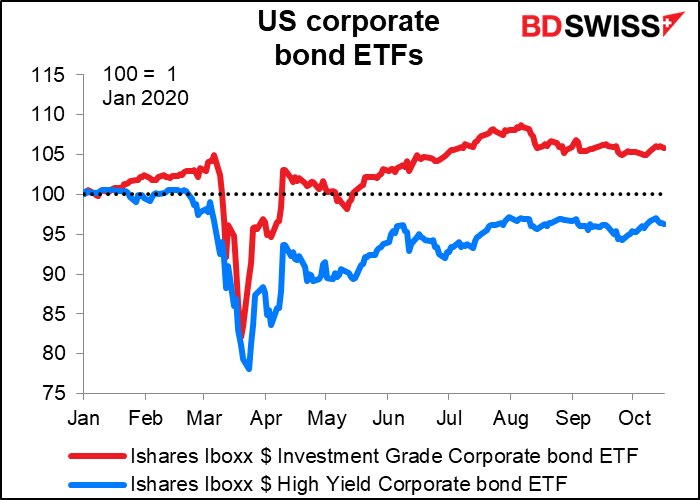 There’s not much to occupy us until early Wednesday morning, when Britain’s inflation data is expected to see a jump in the rate of inflation, both headline and core. The jump is due to a sudden rise in restaurant prices. They dropped during August thanks to the temporary ‘Eat Out to Help Out’ scheme, which gave people a discount in participating restaurants during the month. So the 0.4% mom fall in prices in August will be offset by an (expected) 0.5% mom rise in prices in September.

Nonetheless with headline inflation still well outside of the Bank’s range of tolerance, the pressure for further stimulus is still there. GBP-negative 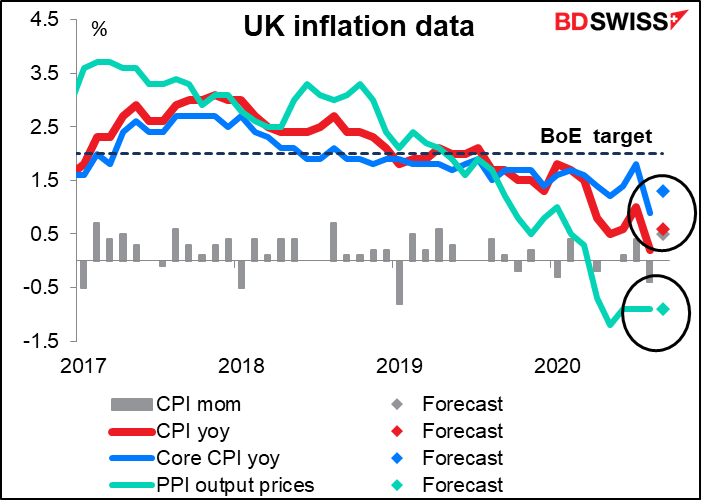 The public sector borrowing is expected to be sky-high, but it’s sky-high everywhere, so I don’t think this will make much of a difference. Nonetheless it might start to – Moody’s downgraded Britain late Friday by one notch to Aa3 — equivalent to a AA- rating from rival S&P Global — while adding that its outlook was “stable.” Moodys says  growth would be “meaningfully weaker” than it had previously believed. The pandemic is likely to weigh more heavily on the UK economy than it does on other major developed countries, given the UK’s reliance on services that require human interaction, it explained. 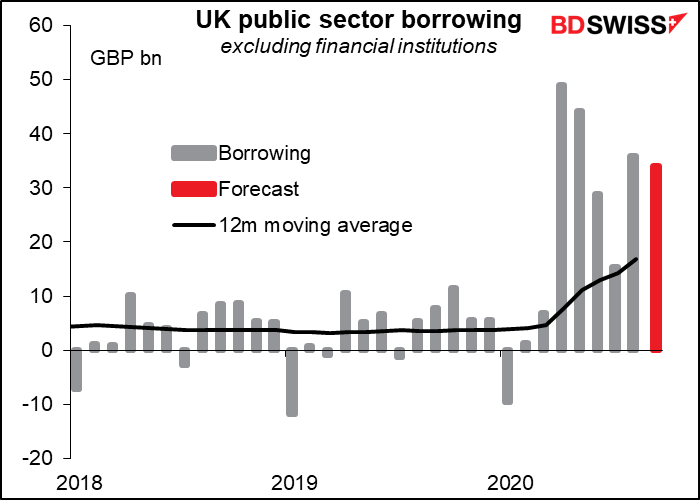 Nonetheless, the downgrade doesn’t seem to be discouraging people from buying gilts, as yields are lower across the curve than they were a week ago. 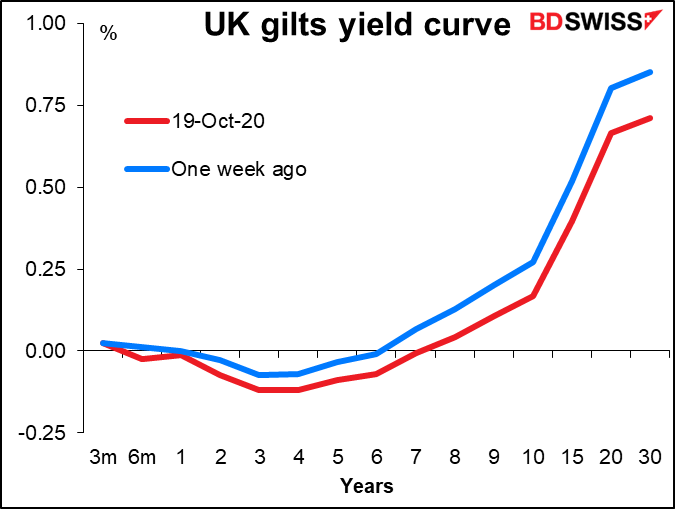 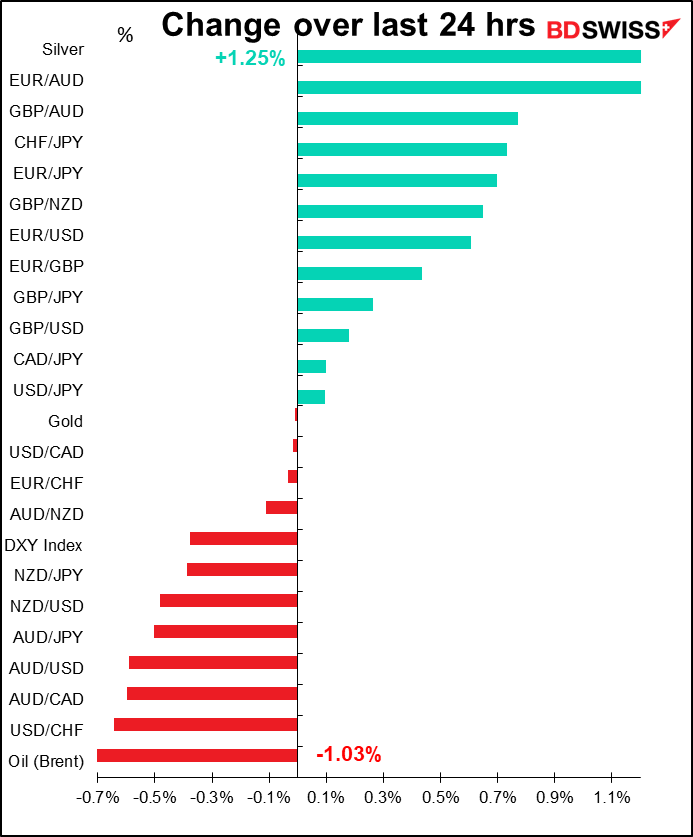