PCE Deflator: the Little Indicator that should be Bigger

When most people think of inflation, they think of the consumer price index (CPI). That’s not what the Fed uses to determine whether it’s meeting its goal for “price stability,” however. Since 2000, the Fed has been framing its judgement of inflation in terms of the personal consumption expenditure (PCE) deflators.
For example, every quarter the members of the rate-setting Federal Open Market Committee (FOMC) set out their forecasts for the economy in what’s called the Summary of Economic Projections (SEP). In the SEP, the forecast for inflation is framed in terms of the PCE deflators, not the CPI.

The Fed may prefer the PCE deflator, but the market prefers the CPI. The Bloomberg relevance score for the mom change in the CPI is 96.1, meaning about 96% of the people who have any alerts set for US indicators have an alert set for this indicator. By contrast, the highest figure for any of the PCE deflators is 60.1 for the month-on-month change in the core deflator. That’s quite low – normally I wouldn’t even bother discussing an indicator with such a low score.

I’m at a loss to explain why the market places so much more weight on the CPI than on the PCE deflator when in fact they should be looking at the latter exclusively. My guess is that it’s just inertia and force-of-habit. When people think of “inflation,” they think of “CPI,” not “PCE deflator,” which is a more esoteric concept.

I’d like to explain in this piece what the PCE deflators are and how they differ from the CPI1.

There are four main areas of difference in how the two indices are constructed:

Formula effect: The main difference between the two is that the basket of goods and services is fixed in the case of the CPI, while it varies according to demand for the PCE deflators. So, for example if chicken becomes more expensive relative to pork, people usually eat less chicken and more pork. The PCE deflator is adjusted according to up-to-date expenditure data and will therefore take this into account. Naturally in such a case it will show less of a rise than the CPI, which will keep using the same weight for both. (I’m a vegetarian and so don’t eat either, but it’s still good for an example). The CPI basket is only adjusted every few years.

Weight effect: The relative weights assigned to each of the items in the CPI and in the PCE indices are based on different data sources and are therefore different. The CPI is mostly based on the Consumer Expenditure Survey, a household survey conducted for the Bureau of Labor Statistics (BLS) by the Census Bureau. The PCE indices on the other hand primarily use surveys of businesses that sell to individuals, such as the Census Bureau’s annual and monthly retail trade surveys, the Service Annual Survey, and the Quarterly Services Survey. Businesses tend to be much more reliable and accurate in replying to surveys than consumers, whose memories of what they bought are often faulty.

Scope effect: As mentioned above, the CPI measures the out-of-pocket expenditures of urban households, while the PCE indices measure the goods and services purchased by households and nonprofit institutions serving households. This conceptual difference implies that some items in the CPI are out-of-scope of the PCE indices and vice-versa. For example, medical care in the CPI includes only those services that consumers purchase directly. The PCE indices however also include medical care paid for on behalf of consumers — for example, medical care paid for by private insurance or by government programs such as Medicare and Medicaid. Given the cost of medical care in the US, this is a huge difference.

Other effects: There are a variety of other differences, some of which are quite technical. For example, the seasonal adjustments are revised at different intervals, which causes some differences. The ways of combining the individual price series into one big index are different. And prices are gathered differently in some cases – for example, the PCE index for airfares is based on passenger revenues and the number of miles traveled by passengers, while the CPI is based on prices charged for air travel for sampled routes.

Why use the PCE deflator? The Fed made the switch from the CPI to the PCE deflators in its February 2000 submission to Congress (what was known as the Humphrey-Hawkins Report). They explained their thinking as follows:

The PCE chain-type index is constructed from a formula that reflects the changing composition of spending and thereby avoids some of the upward bias associated with the fixed-weight nature of the CPI. In addition, the weights are based on a more comprehensive measure of expenditures. Finally, historical data used in the PCE price index can be revised to account for newly available information and for improvements in measurement techniques, including those that affect source data from the CPI; the result is a more consistent series over time.

Having said all this, the difference between the inflation rate that the two come out with isn’t all that great, especially at the headline level. They generally follow the same path, but the PCE deflator is less volatile and usually shows lower inflation. 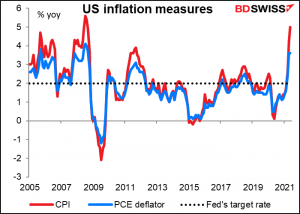 The difference is more visible on a month-on-month basis, where the PCE deflator is consistently less volatile than the CPI 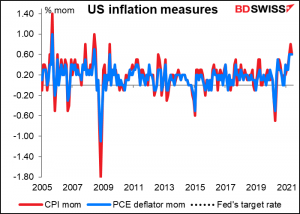 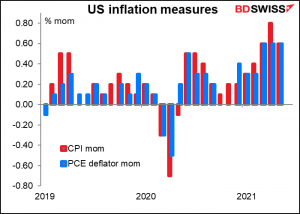 There’s much greater divergence at the core level, which is important because the Fed considers the core PCE deflator to be the best gauge of inflation. In their February 2020 Monetary Report to Congress, they said the core measure “historically has been a better indicator of where inflation will be in the future than the overall figure.” 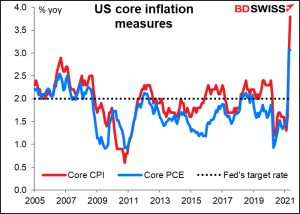 1The analysis in this article is taken mostly from Differences between the Consumer Price Index and the Personal Consumption Expenditures Price Index by Clinton P. McCully, Brian C. Moyer, and Kenneth J. Stewart

Microsoft vs Meta Platforms: Who will Rule the Metaverse?

Russia-Ukraine Crisis: Its Effect on Global Markets and What Happens Next

Microsoft Surpasses Earnings Expectations: What Can We Expect From MSFT?

BDSwiss EU Copyright © 2022 BDSwiss All Rights Reserved
Risk Warning: CFDs are complex instruments and come with a high risk of losing money rapidly due to leverage. 69.2 % of retail investor accounts lose money when trading CFDs with this provider.
You should consider whether you understand how CFDs work and whether you can afford to take the high risk of losing your money. General Risk Disclosure
Close
Close
We use cookies to ensure that we give you the best experience on our website. If you continue to use this site we will assume that you are happy with it.Ok