Implications of Trump getting the virus: Peak Uncertainty

Trump announced – and the White House confirmed – that Trump has the COVID-19 virus.

This is really serious.  Trump is 74, obese, and has a host of other ailments that make him a prime candidate for the intensive care unit (ICU). He’s said to be a heavy drug user. There were rumors that he had a minor stroke recently. He’s clearly suffering from frontotemporal dementia, an umbrella term for a group of brain disorders that primarily affect the frontal and temporal lobes of the brain, the areas associated with personality, behavior, and language. And we don’t know what else. 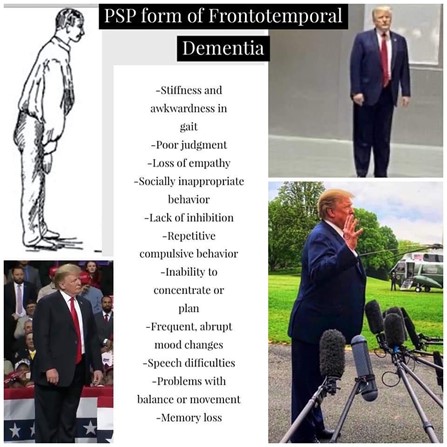 If he’s really sick, I would expect him to be incapacitated for some time, at least. His age cohort has a 92% survival rate and he will be getting the best care available in the US. Nonetheless, a man of his age with his comorbidities is a serious case.

What happens if the President is incapacitated? If the president decides that he is not able to carry out his duties, he can transfer his powers temporarily to the vice president, then reclaim them when he judges he’s OK again. This has happened several times before when presidents underwent medical procedures that required them to have a general anesthetic.

If Trump refused to hand over power, the VP and a majority of the Cabinet can recommend removing the president when he is “unable to discharge the powers and duties of his office.” If the president objects, the House and Senate can confirm the recommendation over the president’s objection by two-thirds vote.

I consider this unlikely, however. Given the way he’s adamantly covered up his health issues so far, I’d expect the administration just to say he’s “resting” or “recuperating” and go about business as usual, lest it focus attention on the pandemic. But there’s a limit to how long they can do this – if he’s in an ICU ward with a tube down his throat, can they hide it?

What happens if Trump dies before the election? Answer: like much having to do with the US election process, it’s not clear. It’s never happened. (There was one Vice President who died in late October, but the guy he was running with lost anyway.)

It might not be a problem, because technically people in the US aren’t voting for a candidate, they’re voting for electors who are pledged to vote for that candidate. The electors would just shift their vote to whoever the party decided, which in this case would probably be VP Pence (unless the Republican National Committee were to pull a fast one and run Ivanka!). The problem is though that each state makes its own laws about whom the electors can vote for. In some states, the electors are required by law to vote for the candidate. But if the candidate’s dead? Probably the Supreme Court would have to rule on that one.

But assuming Trump survives, there are still serious implications. Will he be healthy enough to carry on? People who survive the virus often complain of loss of energy and muddled thinking. He already had heart problems allegedly, which might be exacerbated. He may have to withdraw from the election for health reasons even if he survives.

And even if he’s healthy enough to continue, what message does this give to his supporters, who believed him when he consistently downplayed the severity of the virus, said it was going to “disappear,” and said his administration’s response to it was “perfect”? Moreover, Trump’s whole persona is based on an aura of “winning.” If he’s seen to be a victim, that might cause people to doubt the advice he’s been giving about the virus up to now. Disillusioned with their leader, they’re much more likely to vote Democrat, in my view. (Many people think there would be a sympathy vote for Trump, or that his recovery would prove that he was right to play down the risk and therefore help him get elected, but I disagree.)

In my view, there’s a risk that Trump has to withdraw from the election and Pence becomes the Republican candidate. Then I think a lot of “never Trump” people who were willing to vote for Biden might decide to vote for Pence instead. But what if they’ve already cast their ballot by mail? Oh dear, it’s back to the Supreme Court for that one.

But of course Pence never wore a mask when he was around Trump, so Pence may have the virus too, plus a host of other senior Republicans. The story that they’re saying is that Trump caught the virus from his assistant, Hope Hicks. Here’s a list of people who’ve been near Ms. Hicks recently: 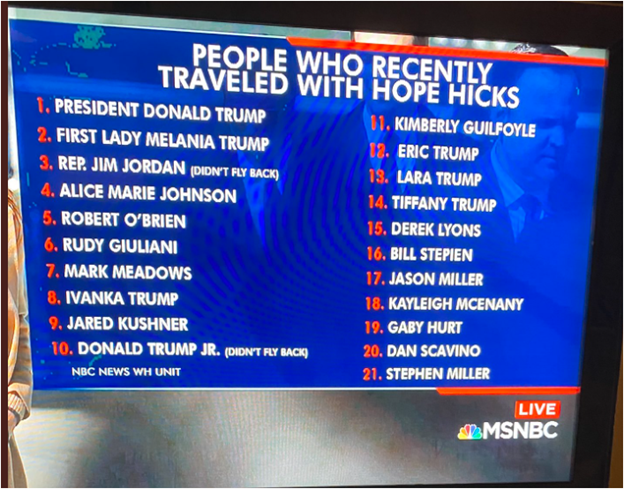 What happens if both Trump and Pence are incapacitated? Then the Speaker of the House, Nancy Pelosi — a Democrat — would become acting President temporarily. I suspect however that the Republican administration would prop Trump’s dead body up in a chair and pretend he’s still alive rather than allow that to happen. But we have to see.

Market implications:  With all these new uncertainties, this is a big “risk-off” move for the market. I would expect the “safe-haven” currencies – USD, JPY and CHF – to rise and the commodity currencies to fall.

Markets have begun to discount a Biden victory and seem to think that it would be positive for the economy. As none other than Lloyd Blankfein, once the Chairman and CEO of Goldman Sachs, said, “So far the stock market doesn’t seem too upset at the prospect of Biden winning, despite Trump’s more market friendly policies. Perhaps folks think their stocks and 401(k)s will do better with higher taxes and increased regulation than with nastiness and scorched earth.”

But the possibility of Pence stepping in in Trump’s place…the implications of that are unclear. Many Wall Street types may prefer Pence to Trump or Biden, in which case Pence replacing Trump could be the trigger for a huge “risk-on” move! If Pence were the Republican candidate, the markets might be happy with either man winning, which would be the best of all possible results for stocks. Until then though, no one likes uncertainty, especially not this far into the election process.

One more point to consider:  does he really have the virus? Back in July the Washington Post clocked him as saying 20,055 false or misleading claims during his 1,267 days in office at that time, or about 16 lies a day. Maybe he isn’t sick at all – maybe after his disastrous debate performance, he realizes he’s likely to lose the election and is looking for a face-saving way out. In this scenario, he resigns due to health reasons, VP Pence becomes President and grants him a pardon for any federal crimes he may have committed.

Unfortunately for Trump, a federal pardon is of no use in civil matters or in state criminal prosecution, which is what Trump could face in New York. New York District Attorney Cyrus Vance Jr.’s team said that “if misstatements about business properties were conveyed from the Trump Organization’s headquarters in New York to business partners, insurers, potential lenders or tax authorities, that could mean the breaking of state laws such as scheme to defraud, falsification of business records, insurance fraud and criminal tax fraud.”

Be that as it may, we have to consider the possibility of Pence running in place of Trump. I would think Pence would have a better chance of winning than Trump – as I said before, some of the “never-Trump” Republicans who might have been willing to vote for Biden would vote for Pence instead, while without Trump on the ticket, some Democrats might not feel the same urgency to get out and vote in the middle of the pandemic. But it would be a big mess because of the ballots that have already been mailed in.

At the same time, as long as we’re thinking the unthinkable, we have to consider the possibility of Democratic VP candidate Kamala Harris running in place of VP Biden. Biden was on stage with Trump without wearing a mask for 90 minutes while Trump screamed and shouted. Biden might be infected too…

We could have a Pence-Harris contest..or a Harris-someone else contest…or who knows what?  It’s peak uncertainty, folks. And that’s never good for markets.

Positioning in FX and Precious Metals: Speculators bet that Trump would lose. Oops!

Bank of England: Raising the Ceiling for Asset Purchases

Today’s US Election: A Guide to what’s important and what to Watch